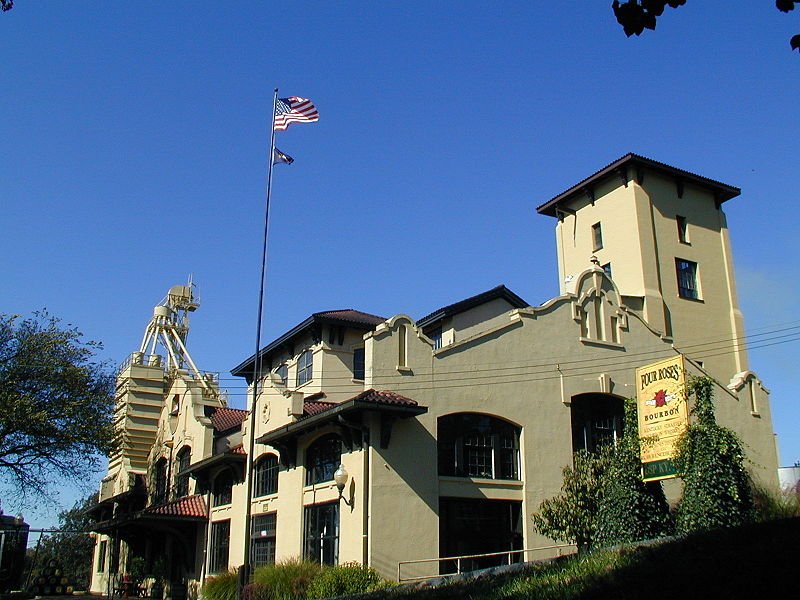 I’m a pretty big fan of bourbon, it has a robust character about it that just speaks to me. This is also true about the distilleries that make it, they have some very interesting stories to tell. Four Roses is a perfect example of both aspects that I have just mentioned, the distillery history is as unique and robust as any you could find.

Originally founded by Paul Jones Jr in 1888 the legend goes that the name comes from his wife. When he first sent his marriage proposal to her she replied if the answer was yes, she would ware a corsage of roses to the upcoming grand ball. He waited with anticipation on the night for her entrance, when she arrived at the ball she was wearing a corsage of four red roses. Paul later named his bourbon Four Roses after this although there is another version, that says it is named after Rufus Rose and his family who not long after creating the brand sold it to Paul Jones Jr. Now which ever version you believe to be true this was just the start the journey. As Mr jones goes on to create the Frankfort distillery company with which Four Roses was the jewel in the crown.

Now Four Roses has always been a popular bourbon and was the best selling one during the 20’s, 30’s and 40’s. Being one of only six distilleries allowed to sell its stocks during the prohibition era for medicinal use, making sure it didn’t fall by the wayside as many distilleries did. In 1943 Seagram purchased Frankfort distillery company, mainly to gain control of the Four Roses brand. They wanted to concentrate on there blended whiskies launching a blended whiskey under the Four Roses label, by the end of the 50’s they had stopped selling the bourbon in the US. Only exporting it to Europe and Asia where it became the leading bourbon brand with a loyal following.

This was the case for over 40 years, where the only bottle to be available in the US with the Four Roses name was the blended whiskey. Thankfully in 2001 Japanese brewery company Kirin bought the distillery and ceased production of the blended whiskey. They then reintroduced Four Roses as a Kentucky straight Bourbon in the US, soon becoming a brand with a loyal following as it once was. 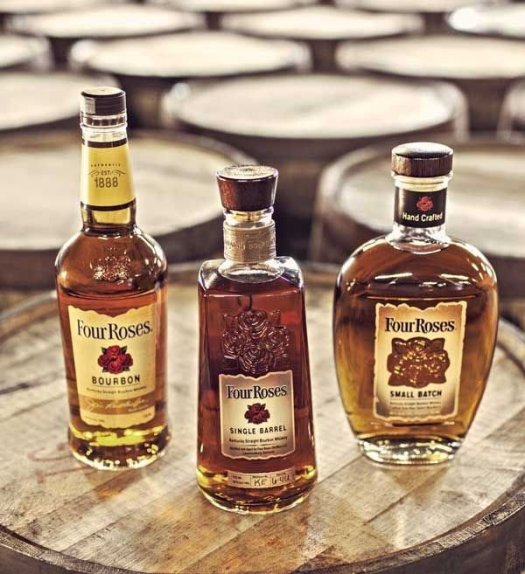 This was achieved under the supervision of the Bourbon Hall of Famer that is Jim Rutledge, his work ethic and passion making Four Roses one of the leading brands again in the US. With only three expressions in the core range it seems strange that they produce 10 different recipes for their bourbon. This is made up from two different mashbills, one that is 60% corn, 35% rye and 5% malted barley. The second is 75% corn, 20% rye and 5% malted barley, theses are then used with 5 different strains of yeast to create the 10 recipes. Only one expression uses all ten recipes (Four Roses bourbon) the other two use one and four only. Single barrel use only one recipe and the Small Batch uses four different recipes. Theses normally consist of the two mashbills both being used with just two of the yeast strains, aiming for a rich fruity spice profile.

Now having tried the complete range in the past I can see why it has a loyal following, the quality has always been consistently good. With a higher rye content than a lot of bourbon producers, it seems to suit me better than most. The Small Batch is probably my go to from the range with the single barrel very close behind. I was recently lucky to try this year’s limited Small Batch release and compare it to the standard expression thanks to Sorren from OCDwhisky. My tasting notes are below for both expressions, the limited release is something special with the nose being complex but needing time to open due to the strength. Bottled at 53.9% abv compared to the standards 45% abv, it delivers a very similar nose but with a softness to it I didn’t expect. The palate let’s more of the rye come through and again feels like it has more depth, more definition to the flavours that make it stand out from the crowd. Again showing why Four Roses is one of the most loved bourbons around, is it my favourite? that I’m not sure about but it most certainly is a contender and one I’ll always have in the house.

Finish: Medium with a spicey warmth, dry to start but leaves the mouth watering..

Finish: Quite long with a bitter/sweet spice that stays to the very end..